Improving Recovery after Surgery for Older Adults Living with Frailty

Late last year, Solange Lemieux developed a bowel obstruction. She was vomiting badly and feeling terrible. She went to her doctor, who immediately arranged for her to fly from St. Paul, Alberta, where she lives, to Edmonton. There, Dr. Rachel Khadaroo performed emergency surgery, which included removing part of the bowel, where the medical team had discovered cancer.

Just a few weeks after her surgery, Solange declared herself to be completely recovered, back home, and as mobile and strong as ever. Which would be impressive for anyone that soon after major emergency surgery, but is particularly impressive considering that Solange Lemieux is 90. 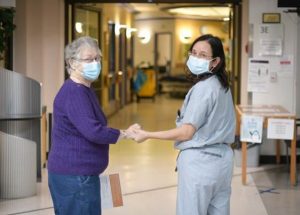 impressive recovery is that Rachel Khadaroo was the doctor who performed the surgery. Dr. Khadaroo is an Associate Professor, Surgeon-scientist and Intensivist  in the Department of Surgery and Critical Care Medicine at the University of Alberta. About 10 years ago, she began to focus on how older patients, specifically those living with frailty, were faring after having had emergency surgery.

“I had begun to realize that older and patients that are frail were just not doing as well postoperatively,” says Dr. Khadaroo. “Quite simply, there is clear link between frailty and vulnerability to post-surgical complications, slow recovery, and even death.”

The main thing about frailty is that it causes vulnerability to all sorts of different stressors. And there isn’t much that is more stressful to the body than emergency surgery. What Dr. Khadaroo is doing, and what we are proud to be helping her do, is finding ways of mitigating those stressful factors.

That realization set Dr. Khadaroo on a research path that has attracted a great deal of attention in the elder care community. It began with a study and treatment program called Elder-Friendly Approaches to the Surgical Environment (EASE). The goal of the study was to design post-surgical care specifically for patients who were older, to see if that care could improve outcomes and recovery time. This included moving patients to a special ward, added a geriatrician to the team, the early withdrawal of tubes and drains, delirium screening and early mobilization.

“It is hard to see older adults with frailty experience difficulties after surgery that younger people do not,” says Dr. Khadaroo. “I wanted to improve those outcomes and also find ways of helping them get moving, so they were able to return home.”

The results were extremely promising and published in the highest-ranking surgical journal – JAMA Surgery. There were 19 percent fewer major complications and deaths among patients who received the specially designed care.

I had begun to realize that older and patients that are frail were just not doing as well postoperatively,” says Dr. Khadaroo. “Quite simply, there is clear link between frailty and vulnerability to post-surgical complications, slow recovery, and even death.

The EASE study gave birth to two other research projects. The first is EASE-BIO (Biological samples to Identify & Optimized care), which added the study of muscle characteristics to the study. Dr. Khadaroo explains:

“We know that muscle mass and quality of muscle has impact on how you function and how quickly you recover. We decided to include a group of patients who had a muscle biopsy, during surgery. This will provide us with information to  help predict what type of care a patient might require post-surgery, for example with respect to diet and exercise.”

The second project to emerge from EASE is the BEdside reconditioning for Functional ImprovemenTs (BE-FIT) exercise program. BE-FIT focuses on bed-mobility, balance, walking, and climbing stairs. The program encourages patients to be out of bed, maintain their function while in hospital, and support their post-surgery recovery with the healthcare team. 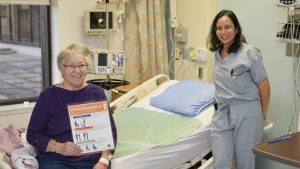 The BE-FIT program is still early in the research stage, being tested on patients in three Alberta hospitals. One of those patients, as it turns out, was 90-year old Solange Lemieux. She says the post-operative exercise program helped her very much. She is managing well in her assistive living home, takes care of herself, goes for meals in the dining room, and is grateful to Dr. Khadaroo and everyone involved in the project.

“I wanted to get back to how it was before, and I did,” she says. And then she laughs. “I don’t feel quite as strong as I used to be, but then I’m not getting any younger.”

Rachel Khadaroo’s funding comes in part from Alberta Innovates, Alberta Health Services, and also from the Canadian Frailty Network (CFN). CFN was established in 2012, funded by the federal government’s Networks Centres of Excellence program, with the goal of helping improve care for older adults living with frailty. Dr. John Muscedere is the Scientific Director of CFN, and he says Dr. Khadaroo’s research is critical in realizing his organization’s vision.

“The main thing about frailty is that it causes vulnerability to all sorts of different stressors. And there isn’t much that is more stressful to the body than emergency surgery. What Dr. Khadaroo is doing, and what we are proud to be helping her do, is finding ways of mitigating those stressful factors.”

Last word to Solange Lemieux, who has this piece of advice for all seniors living with frailty, and specifically those trying to recover from surgery.

“Too many people seem to think, I’m old, I can’t do this. And they seem to lean back and slow down. I think people think about the future too much. You have to work from day to day.”